Ike is The Superhero of Arena Ville on #BBNaija Day 82

In what may seem like an endless fight, the Pepper Dem Gang were at each other’s throats over a case of the missing red box.

Just when we thought the night was going to end in smiles and happy thoughts after a session with 2Baba, the Housemates proved us wrong. How? By showing us why they are proud members of the Pepper Dem Gang, of course!

As you may already know, the Housemates mostly break into fights when food is involved and in today’s case, we reckon to say that this was no exemption. How else can we explain how they remembered to pack food from the party but left the Red Box lonely in the Arena?

The Yells And Roars

Tacha, who seemed affected the most about the repercussion and consequences of the missing Red Box, did not fail to scream out her opinion to the offender – Elozonam. According to Tacha, she did not want to partake in any punishment Biggie had in store for them. To further buttress her point, she reprimanded Elozonam and Diane for leaving the box after a lit night of partying and eating.

Supporting the motion, Mercy also yelled at Elozonam and for her, she didn’t quite understand why he couldn’t own up to his mistake and break the Arena door. “Break it open and be a hero,” she constantly screamed.

Amidst the yells, screams and curses, it was nice seeing how fear could turn Tacha and Mercy into screaming queens in the Pepper Dem House.

Tacha and Mercy overreacted, I can’t totally blame them because they are just being redeemed from Strike. This street is full of hypocrites sha.
Elo can turn the house down because of a missing plantain but Others can’t vent for the missing red box #BBNaija 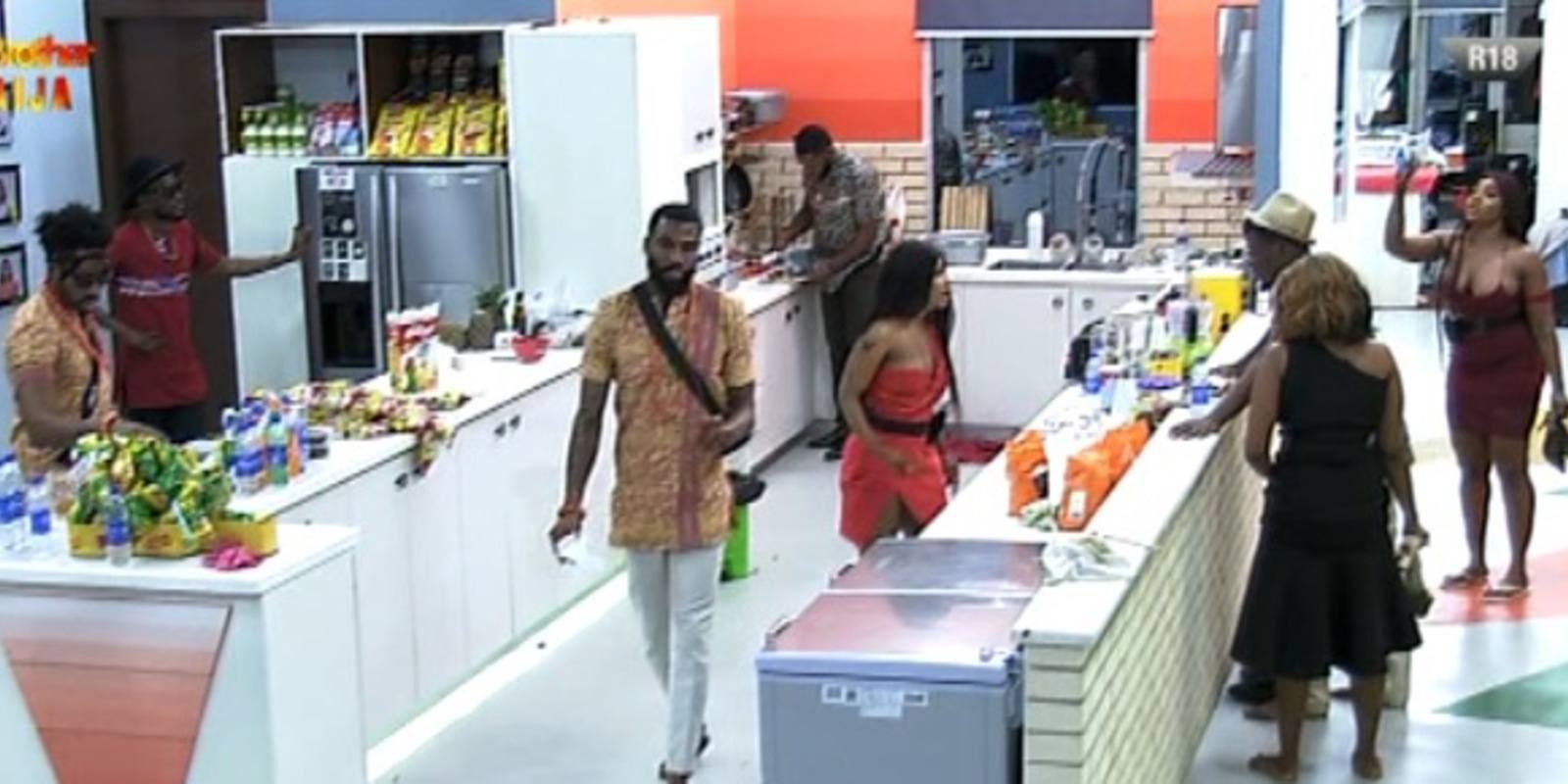 We found it funny that while the Housemates were coming for each other’s necks on this subject, our lonely Red Box was sitting pretty in the Arena, where they left it. As if aware that it was causing commotion in the House, it shone brighter than ever before and remained under the chair, like it was ready to nail a hide and seek game. 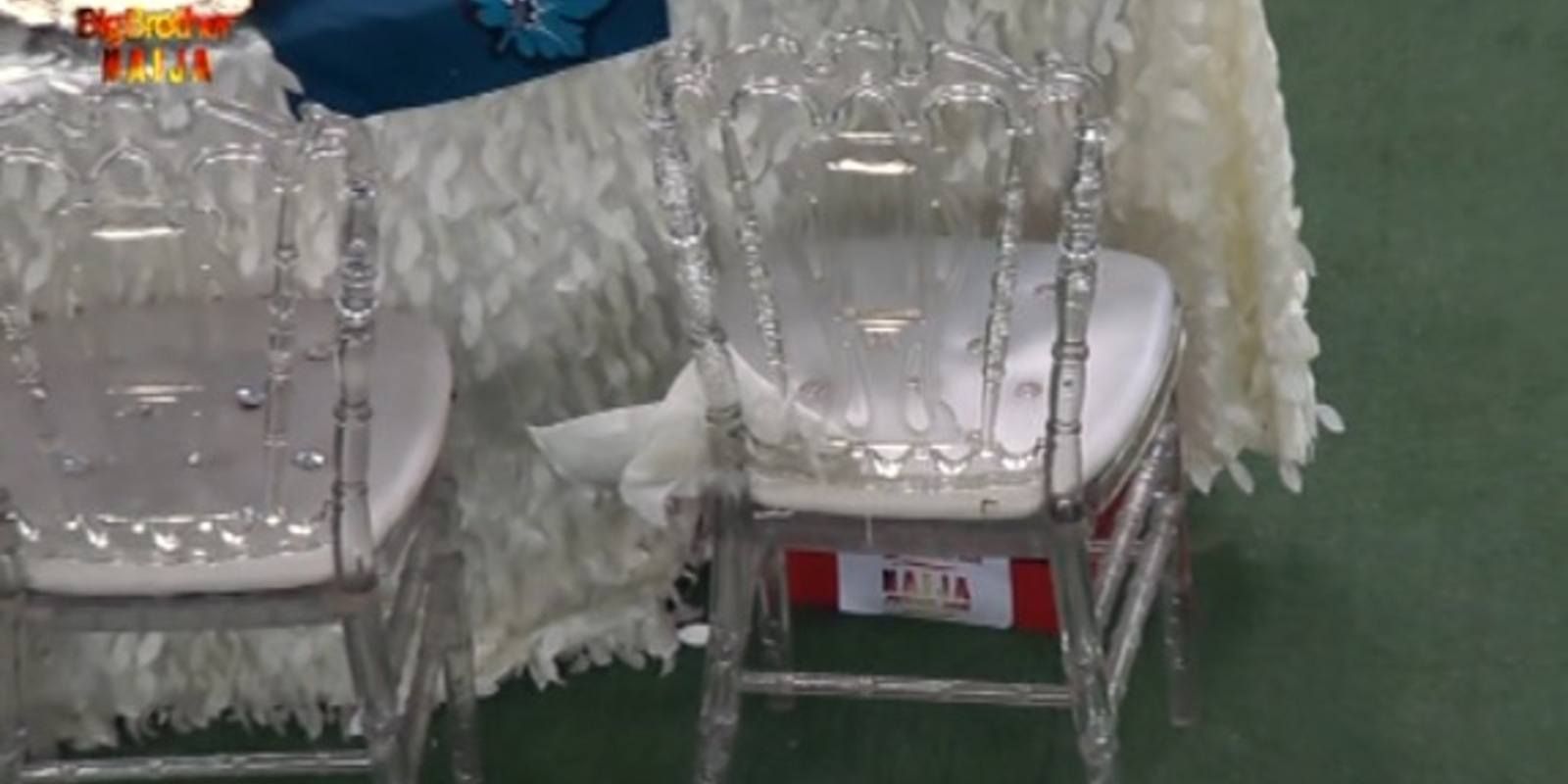 Our Red Box wasn’t the only unlooking face we saw on our screens during this palava. While the House was burning with the heat and drama, Cindy, Mike and Omashola were nowhere to be found.

Not until we caught Cindy doing what she’s known to be good at. “I wish I got more malt abeg, I’m enjoying myself,” she said to herself. Cindy is the one who left the red box in the arena cause she was excited for the food #BBNaija #BBNaijaRedBox @BBNaija pic.twitter.com/mMAqXhWhKL

Finally, Diane let out the steam and replied Tacha’s hit at Elozonam. For the first couple of minutes, Tacha and Mercy screamed and blamed Elozonam for not being careful with the box. However, lover girl Diane was not having it and she exploded while trying to express her anger to Tacha. All thanks to hero Elozonam who carried his princess away from what might have resulted in a crime scene before things got escalated between the Tacha and Diane.

Was Diane’s reaction as a result of the screams or just because the screams were directed at Elozonam? Lambo kept pacing up and down the House, telling everyone but herself to break down the Arena door. She didn’t stop at that; raining curses here, shouts there and making mockery the next minute, Mercy didn’t hide how upset she was over the issue. Even if it involved her resident best friend’s man.

Ike as usual, was there to calm her down and we couldn’t help but notice how cute it was. “This House is not for the weak,” Mercy replied Ike’s statement on how to remain calm to avoid Strikes. The Fear Of Biggie

The fear of Biggie’s punishment is the beginning of wisdom in the Pepper Dem House. Perhaps this is what got Mercy and Tacha in that mood tonight. Are they to be blamed though?

Biggie gathered his guests in the lounge just when things didn’t seem to be cooling off anytime soon in the House. First, he addressed how this wasn’t the first case of carelessness with the Pepper Dem Gang and the Red Box, all within the period of a week. Next, he reminded them of the punishment and consequences that accompany losing the box or being careless with it.

“Your punishments are not limited to Strikes and may involve the early departure of certain Housemates,” he added. After having a father-children chat with them, he asked them to take the box but to spend the night pondering on how things went so bad quickly.

Of course, Elozonam was quick to get the Red Box back and as soon as he got seated again, the Housemates knew Biggie’s silence was not to be taken likely. 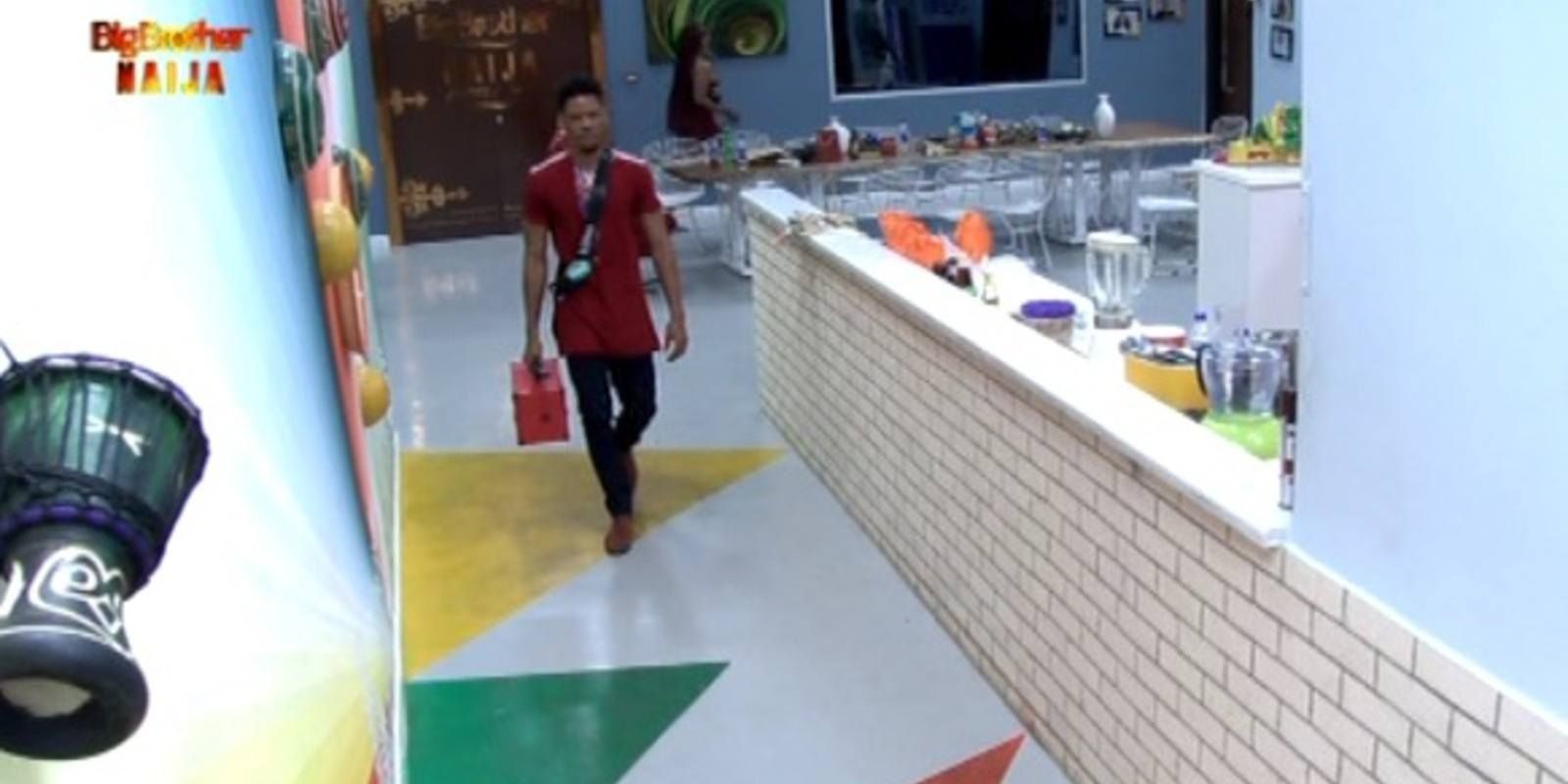 A bit of advice for the noisemakers on this hashtag, the Red box can make Biggie evict your fave in a minute, so be humble, OK #bbnaija

“This conversation is not over,” Biggie said and we can’t wait to see what awaits the Pepper Dem Housemates. Will this finally teach them a lesson or will they (as usual) turn deaf ears to biggie’s caution?

Ike Is The Superhero Of Arena Ville

The Arena belonged to Ike tonight as he was victorious in the Games.

Clad in their capes (which reminded us of Superman), the Pepper Dem Housemates played a game of superheroes and villains which saw Ike become the superhero of tonight’s Arena Games. Omashola wasn’t left out as he came second, leaving the Arena with 200 Bet9ja Coins. The sudden frenzy to use the shopping cart didn’t go unnoticed by Biggie as it has been reopened for business. Now, Housemates can freely order any item from the cart and even items not on the shopping list. There was a subtle restriction attached to this though. The Housemates were to stick to ordering simple things. Before Frodd starts to jubilate, Big Brother has removed certain items from the table. Immunity, Head of House and Veto Power are no longer available. Well, the days of grace are clearly gone.

READ ALSO  Lego trolls Tesla with its own 'shatterproof' truck

With a straw provided, the Housemates were to stack up seven bolts to build a tower. In doing this, they must ensure that their fingers do not cross the line on the straw at any time. Failure to keep to this instruction will attract a penalty. That was what happened to Seyi, Elozonam, Frodd, Diane, Mike and Omashola as they got an additional 30 seconds added to their time for allowing their fingers to cross the marked line on the straw. What is a superhero without flight or speed?

For this challenge, the Housemates must first blow up a balloon then use a bit of tape to stick the balloon to a small pipe on a string. Very simple right? Let’s see, with the right volume of air the balloon is expected to fly to the other end of the string. What happens if it doesn’t? The Housemate gets penalized. The third challenge they had to overcome was the mystery superhero on a seat. Sitting on a simple office chair, the Housemates had to move from one end of the line to the other end of the zig-zag line. They had fun on this one as they all swivelled on the zig-zag line. Equipped with a power hammer, the Pepper Dem Gang all became Thor as they aimed for a web box. They had to stand on a marked spot to make their throw. Well, they all found that it wasn’t an easy feat to make a successful throw as some of them had to repeat the challenge a few times. 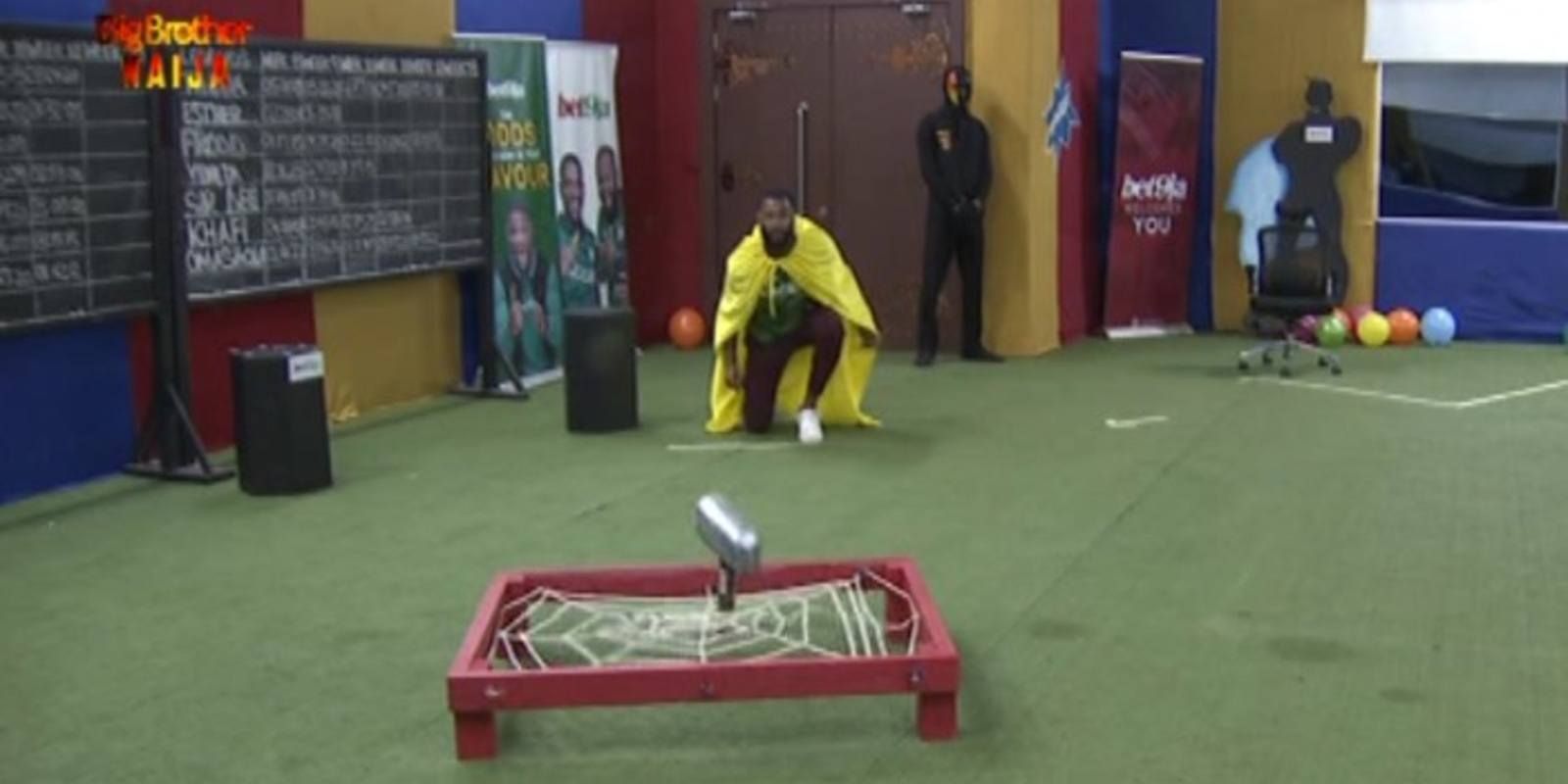 As the Pepper Dem season draws to a close, we look forward to seeing the Housemate that will win the Bet9ja prize money.

The post Ike is The Superhero of Arena Ville on #BBNaija Day 82 appeared first on BellaNaija – Showcasing Africa to the world. Read today!.