A Twitter user has revealed how thugs stole and beat up other fans at Naira Marley’s show which took place in Ibadan.

A twitter user identified as Moyossore took to his Twitter page to share details of the atrocities which occurred at Naira Marley’s Ibadan Fest in Ibadan. According to him, the security at the show was very poor which gave thugs the opportunity to steal phones and beat young girls. He explained that the thugs from different parts of the city came with weapons like axes, cutlasses and even guns to cause commotion at the event.

He wrote  The marlian Fest security was really poor, just too poor. Thugs were snatching phones and bags openly at the fest…later in the morning I will post about somethings that happened at the fest. You get to see boys moving around with cutlass, knife, axe and even guns. One of my homies even saw one iPhone 7 on the floor we have been waiting for the owner to call. The numbers of phones that were snatched/stolen yesterday at the even tho.

What actually saved me last night was that I’m a street boy and a smoker and I have bben to almost all the joints in Ibadan to smoke..they know me. The way they beat up one girl in front of me yesterday before they collected her phone. I really feel very sorry for her. If you see tears that yesterday after phone don comot for your pocket/hands. Lol. Foko, Idi Are, Its Saku, Beere, Opo, Born Photo, Orita Merin, Oje Gege.. you know all these areas in Ibadan? All the boys from there were at the fest…aeon omo iku. 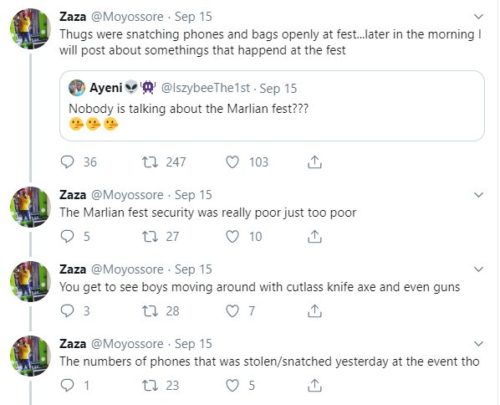 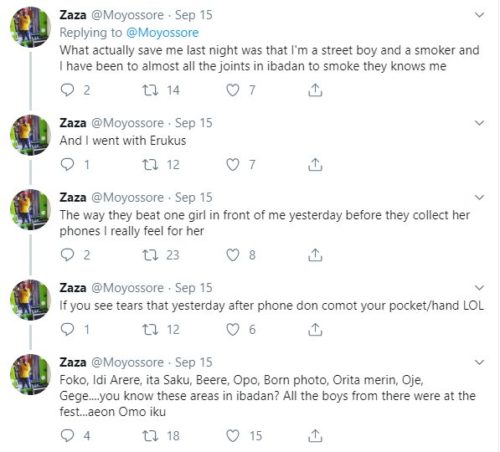 The post Fan Narrates Ordeal At The Hands Of Thugs At The Marlian Fest In Ibadan appeared first on tooXclusive.